We’ve been running Zul’Aman bear runs non-stop for the last 6 weeks or so trying to rack up some bears. The bad news? We fell short too often and as a consequence 2 members of our group won’t get theirs. 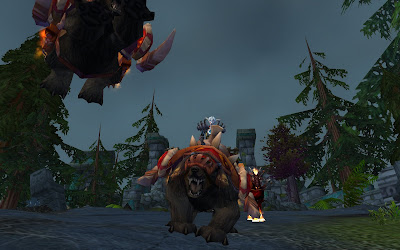 Yeah, that’s me. I got the last Amani War Bear bear we’re likely to get. So dandy and stuff.

Patch 3.0.x is likely to go live on Tuesday, with much gnashing and wailing of teeth. Mostly by me. The buff changes, class homogenization and rogue fuckery have me on edge. Not only is combat a joke, rogues in general are still 2nd-class citizens within the existing setup. It’s broken, clearly, the questions are a) how long it will take to fix and b) how much they’re even willing to fix things.

I’ve tooled around in beta a bit. Enough to know that leveling won’t be an issue for a death knight or rogue, regardless of spec/changes. So I’ve got a 45-day window or so at least for them to fix end-game before I’m even there to get spanked. Like most things WoW-related, only time will tell.